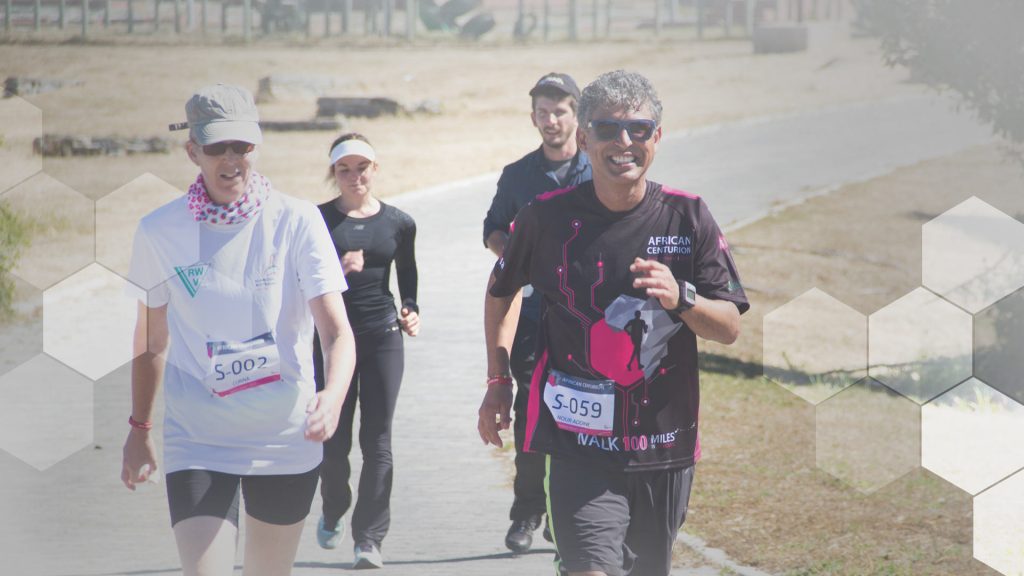 Spaceship Zailab landed on Robben Island for the African Centurion race-walk in October. We arrived as a team and left as a family.


If you haven’t realised by now, our CEO Nour Addine Ayyoub likes to put the team through their paces. Whether it’s hiking in extreme conditions or mountain climbing, if he does it, he usually drags some of us along with him.

So naturally, when Nour Addine decided to take part in the second African Centurion race-walk, he had his team behind him (literally – he was a dot on the horizon) every agonizing step of the way.

The African Centurion takes place over 24 hours and spans 160 kilometers (100 miles) on the World Heritage site of Robben Island. Walkers who finish are awarded a prestigious Centurion walker number that they retain for life. Cue Sinatra’s ‘They Can’t Take That Away from Me’.

Nour Addine was instrumental in bringing the event to the African continent, and naturally his team were only too ready to make the event a success. Team Zailab were on hand from the beginning to coordinate the event, from setup and registration all the way to the finish line.

The 160km route took walkers across Robben Island, including a sweeping stretch of wild Atlantic coastline and a mild incline that crosses the island. Not content with simply helping out, three staff (including Nour Addine himself) took part as solo walkers, while a team of four colleagues (Sebastien Ejdaa, Michela Webster, Annaelle and Wayne More) joined the relay.

Sebastien Ejdaa (centre) waiting for his turn in the four-man relay.

Industrial designer Evan Hughes participated as a novice walker this year. Sadly, Evan’s race was cut short by cramps, but he looks forward to taking part again next year.

‘I had a great time participating in the walk and found the energy and atmosphere so motivating to keep pushing forward through all the aches and pains,’ he says. ‘The route is such a beautiful one and really keeps you engaged with your surroundings which only adds to that motivation. I also found the people at the event this year were all really happy to be there and definitely made the most of their time there, from dancing at two in the morning keeping the excitement and energy alive, to supporting their team or solo walker. Overall it was a great event this year.’

Our second solo walker, designer Carla Burger, ignored everyone who told her taking part in such a challenging event was a crazy idea. ‘My overall experience was really amazing and also very difficult,’ she says. ‘I was able to push myself beyond my own limits (with the help of my wonderful support system) and learned that you can really do anything you put your mind to.’

Her personal highlight was when overall winner, Isle of Man race-walking legend Robbie Callister, complimented her on her stride. ‘He is someone I look up to, and I have never done race-walking before. I watched YouTube videos to figure out how I should walk to be able to keep a good pace going – so that was really motivational and a real highlight.’

It just goes to show that our team can do anything, no matter the challenge. (We’re biased, we know, but seriously.)