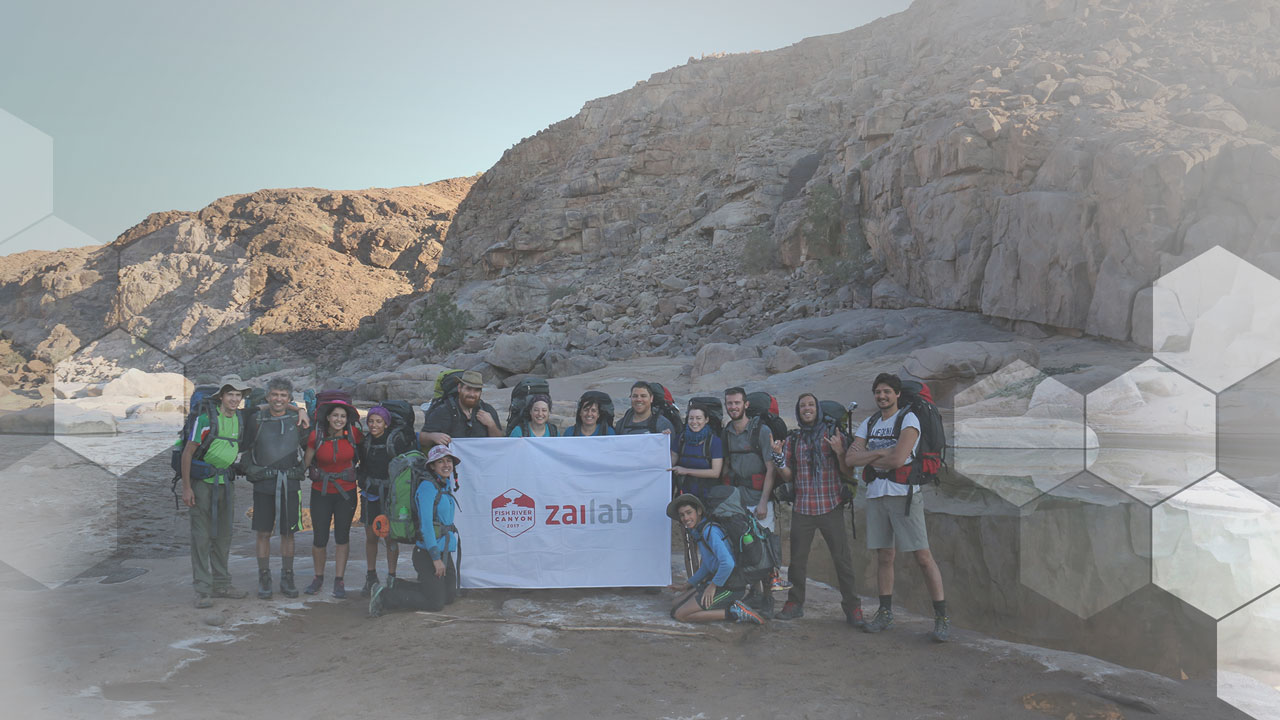 Fish River Canyon: ‘It Makes a Mark on You’

When our CEO Nour Addine Ayyoub chose to take part of the team on a hike through Namibia’s Fish River Canyon, it wasn’t for the natural beauty – it was for the suffering.

‘Companies often call their activities “team building”,’ Nour Addine says. ‘I hate that term. Team building implies that you’re trying to build a team. And let me tell you, if you have to rely on team building to bring your people together, your company is in trouble.’

‘If a bomb exploded in the middle of the city right now, what would you see? You’d see people working together. Why is that? Why do we only help each other and love one another when we’re in misery? When everything is fine we become individualistic. It’s interesting.’

A grueling six-day hike – the usual for Fish River – wasn’t tough enough, either. ‘I made it tougher,’ he says. ‘I made it five days.’

The tyranny of physics

These were the words going through the mind of Zailab designer Michaela Webster on day four of the journey. And for good reason.

‘I think it was day two when the muscle pains set in, and I started getting blisters,’ she says. ‘Still, everything was doable – until day four. On day four we did some stretching before we set out to walk.

‘Apparently that’s the worst thing you can do,’ she says, chuckling.

For the uninitiated, stretching cold muscles is… yeah, don’t do that. Especially when you’re a day past the only escape route on a torturous six five-day hike. ‘When I pulled it I thought, wow. Okay. This is a game-changer.’

Thankfully, it wasn’t all blisters and pulled muscles. ‘There were so many beautiful moments,’ Michaela says. ‘The canyon is massive, and from up high it seems dry, barren, full of nothing but rocks. It looks dead. It looks lonely.

‘But when you get down there, when you really get in and you look, you discover just how much life there is in it. You’ll come across a single white lily in the middle of a sea of sand. The river is full of these little fish that come and suck on your feet.’

The pull of the campfire

‘With the typical team-building way, the majority of the time people just get drunk,’ says Nour Addine, who really doesn’t like team building if you haven’t picked up on that yet. ‘And with colleagues, it’s usually very easy to talk about work because you’ve got that in common – and because you have nothing else to say.

‘In our case, nobody spoke about work. This is a really good sign. It shows that they were truly comfortable with each other. It shows they were connecting on a friendship level. They want to talk to each other.’

He’s not wrong about that.

‘At the end of the day we’d gather around the campfire, and people got the space to speak for a while without being interrupted,’ says Susie Gardiner, one of our business analysts. ‘You could imagine people, historically, getting together like this around a fire and giving people the platform to really talk.’

And without the usual distractions of modern living, talk gets real.

‘It’s very much back to basics,’ Susie says. ‘People let their guard down a bit more. So I saw a lot of raw emotions coming out of people. People let go of their masks and roles – what they think they should be in order to do well.’

Designer Darren Croxford has a similar take. ‘It’s always nice stepping outside of an office environment with your colleagues. You see a different side to them straight away. At work, it’s like people think that other people are expecting certain things of them, so they put on this make-up.

‘In every job I’ve had, I feel like I’ve had to meet the terms and expectations of every single person in the office. So I go overboard. I overwork myself. I burn myself out completely. Then I still think ‘Cool, I can figure this all out myself.

‘Coming to Zailab has taught me how to share my feelings about work, how to share work in general, and how to speak to people I might be frustrated with.’

Says Michaela, ‘On a trip like this you get to see everybody as real humans. Nobody’s all composed, like you’d find at work. Because – and you don’t intentionally do it – at work you put people in boxes in a way.’

It’s a sentiment the rest of the group shares.

‘When I went on this trip I noticed how many people box themselves in and become their own story,’ says Darren. ‘Meanwhile it’s all about sharing your story, taking from other people’s stories to see if you can help improve your own.’

Susie resonates with this too: ‘There’s always a little bit of competition in the workplace. People put on their masks and roles – what they think they should be in order to do well.

‘On the hike people just let their guard down, especially because they’re tired from the day.’

‘Nothing’s kept back when you’re in that moment,’ says Michaela. ‘It’s completely freeing. You just don’t care – you say it the way it is. And because of that you learn something new about one another.’

‘It was beautiful to see how comfortable we were with one another,’ continues Darren, ‘and how much we wanted to speak to one another about certain things. Not all of those things were comfortable to talk about. Some deep demons came out of some people.

‘And it’s the best, because you realize that your demons aren’t that bad.’

‘I must be honest,’ says Nour Addine. ‘This is the strongest team I’ve ever been with. Without a doubt. Typically are people who need more help than others. In this case everybody just did their thing. They were strong – and they were good to each other.

‘You take this sort of thing back to work. You know these are people you can go to war with. They won’t relax. And I tell you, the ones who don’t have what it takes, it comes out on a trip like this.

‘A trip like this is important. It connects people at a deeper level. And that connection is where strength comes from.

‘These are people that will run the business. They’re the next leaders, our main guides. They’re resilient. They’re bulletproof.’

‘These trips are strange,’ says Susie. ‘The impact they have doesn’t just come all in one go. They have this ripple effect. It’s like when you read a book – the impact that book has on you throughout your life, you can’t really pinpoint that.

‘It makes a mark on you. And then you go forward with that mark.’

Want to know more about our Zailab adventures? Read about our adventure to Mount Kilimanjaro.